Santa Gets a Second Job

Il secondo lavoro di Babbo Natale has been translated into different languages and it’s now available in the Uk, Usa, Spain and South America, Greece, Poland, Ukraina, Russia, China and South Korea. Here you will find a short description of the English version, pubblished by  Pan MacMillan and translated by Denis Muir.

Santa gets a second job on MacMillan site

Santa gets a second job on Amazon

Times are tough for Santa. He’s tightened his belt, made the reindeer redundant and now it’s time to get a second job. But finding work is not easy at all, even if you’re Santa: he tries being a waiter, a party entertainer, and even works in a call centre. He finally finds the perfect job to be useful to the community: the bin man! Santa soon discovers that waste can conceal wonderful gifts, and he is soon back on his sled delivering toys made from recycled materials. But when Santa finds some lost letters from a child in the bin, will he have enough to power his sled to find the little girl before Christmas day?

Hilarious and heartwarming, Santa Gets a Second Job is the perfect present for Santa fans of all ages from Michele D’Ignazio and Sergio Olivotti. 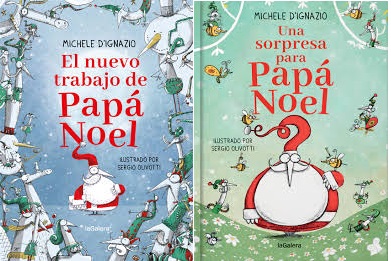 About Michele D’Ignazio: My first book was Storia di una matita (My life as a pencil) which was published by the Italian editor Rizzoli. The book has been highly appreciated  and, based on the book, a Pencil Tour was created, which gave me the chance to organize workshops in schools and libraries where I enjoy to play language games, reading activities and puppet shows with the so many children I have been meeting so far. The story is full of imagination and a bit surrealistic, mainly for kids aged between 5 and 10, but it can be appreciated by adults as well. “Storia di una matita” has become a 3 book series, togheter with Storia di una matita. A scuola (The pencil-boy at school) and Storia di una matita. A casa, always published by Rizzoli, that also released the novel Pacunaimba, an adventure book about Brasil. I also am a documentary filmmaker and I own, in summertime, a cultural “locanda” in San Nicola Arcella, a sea-village in Calabria.

Title: Storia di una matita (My life as a pencil)
Author: Michele D’Ignazio
Book Cover: Serge Bloch
Italian publisher: Rizzoli
Lapo is almost thirty and he just moved to a big city, working on a dream: become an illustrator. Yet, things do not go very well at the beginning, but he believes so much in his capacities that all of a sudden, one morning, he becomes his dream, waking up in a new form, the tool that he always holds in his hand: a pencil. He is a pencil boy now! He leaves signs and drawings all over the place.

But he cannot show emotions and he has to draw faces, one for each emotion, which he will show to people when needed. He draws more than 100, but he realizes that it is not enough. He has to temper his tips instead of combing his hair. And he begins an incredible tragicomic adventure in the big city!

Download an extract of My life as a pencil

Lapo teaches Art and Drawing in an elementary school. He has a very special class: Paolo only thinks about soccer, Pamela never speaks, Tommaso is afraid of everything and always puts his fingers in his nose. Although, Lapo is himself a very particular teacher. He lets his class draw in the school-yard, he listens to their home stories, he takes them to the city, to the lake and invites them to invent a new world. All this happens, while following a very sharp border between reality and imagination.

Santo Emanuele is the young assistant of Lancastre’s Mayor. It’s time for elections and, to be re-elected, the Mayor needs a vote by one of  Santo Emanuele’s relatives, for many years lost in the Brazilian forest. It is the beginning of an incredible journey. Going through wild animals and kids in the favelas, Santo Emanuele discovers a part of his personality that it was totally unknown to him.